AP McCoy turns his hands to dressage during The Open

The biggest Jump meeting in the UK this side of Christmas, The Open, takes place at Cheltenham Racecourse on Friday, Saturday and Sunday, November 13, 14 and 15. This year's event is set to be as thrilling as ever, with three days of top-class racing, atmosphere and revelry.

Some of the hottest names in equestrian sport will gather at the Home of Jump Racing for Countryside Day on Friday, November 13, the first day of The Open. Alongside the terrific racing action, Equestrian Team GBR athletes - with the 2016 Rio Olympics in their sights - will be present to celebrate and participate in a variety of fundraising activities.

Before racing commences, one of the hottest attractions of the day promises to be a unique display which sees the legendary A P McCoy take the reins of a Grand Prix dressage horse, under the watchful eyes of Olympians Carl Hester and the current World Number One, Charlotte Dujardin, in the parade ring.

The demonstration is one of a number of fundraising initiatives that will take place during the day in aid of the Countryside Alliance and Equestrian Team GBR.

Racegoers will also be able to bid for unique prizes through a silent auction and enjoy a hound parade. Vital monies raised will go towards supporting the Olympic dressage, eventing, showjumping and para-dressage squads as they prepare for next year, helping them to arrive in top condition to compete with the world's best. 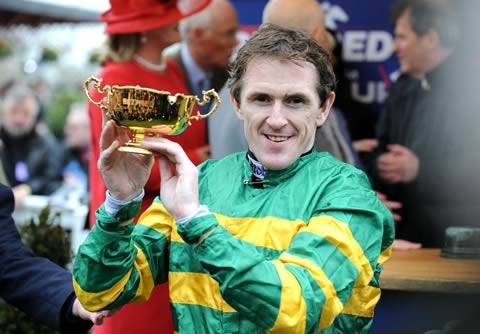 A P McCoy, who retired from race riding in April after a record-breaking career which included 20 consecutive Jump jockey titles, will also be signing copies of his autobiography, due out this autumn and titled 'Winner: My Racing Life'.

The Open has very much established itself as the most popular meeting in the first half of the Jump season. Around 70,000 racing fans visit the Home of Jump Racing to witness the equine stars battle it out in compelling racing.

Similar to The Festival in March, there is a tented village area, where visitors can browse the shops, selling a variety of beautiful and unique clothing, pictures, gifts and furniture.

The Saturday of The Open offers tremendous racing, with the £160,000 Grade Three BetVictor Gold Cup the highlight of the seven-race programme. The very prestigious handicap chase was won last year by Caid Du Berlais, trained by Paul Nicholls and ridden by Sam Twiston-Davies.

The third and final day of The Open takes place on Sunday, November 15, the only Sunday that Cheltenham races on during the season. This is more of a day for families, with lots of kids' entertainment to keep the little ones entertained. On the racing side, the highlight race is the two-mile StanJames.com Greatwood Handicap Hurdle, a Grade Three event which often produces a contender for the Stan James Champion Hurdle at The Festival in March.

Whether it be a day with colleagues on the Friday or bringing the whole family along on the Sunday, The Open really does offer something for everyone.