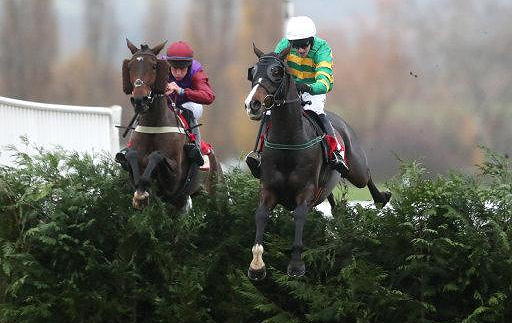 The well-supported Josies Orders justified 2/1 favouritism with a game success.
Ridden by Mark Walsh and trained by Enda Bolger, the 10-year-old son of Milan was prominent throughout the extended three mile and six-furlong event and despite being headed narrowly after the final obstacle, the gelding responded willingly to Walsh's urgings to score by three-quarters of a length. Jamie Snowden's Fact Of The Matter finished second.
Josies Orders won this event in 2015, when partnered by Nina Carberry and today's winning rider Walsh believed ground conditions were important in today's renewal.
He said: "Without the blinkers, he won't travel and he won't jump. Even though I was in front long enough today, I got down to the last and his ears pricked so I had to keep the revs up because he is the sort of horse who will take things for granted.
"He really likes good ground and that was an important factor for him today.
"Gavin's [Sheehan, riding Fact Of The Matter] horse was upsides me jumping the last and pushed me along but I was always going to win.
"This lad was pulling up going to the last with his ears pricked but, when Gavin went by me, he had something to aim at.
"In fairness, he stuck his head down and galloped all the way to the line.
"It's an absolute joy to ride for Enda in these races, all I have to do is steer and enjoy myself.
"Enda has these horses so well-schooled and they love it, which is the main thing because, if you don't love jumping those banks, you will win nothing."
Trainer Gordon Elliott expressed delight with Tiger Roll after the eight-year-old finished fourth.

It was the gelding's first start since his memorable victory in April's Randox Health Grand National, in which he carried Davy Russell to victory in the colours of Gigginstown House Stud. Today he was held up for much of the race, crept into contention on the final circuit, but, carrying top-weight, could not reach the leaders in the home straight.

Elliott, said: "It was lovely - Keith [Donoghue] thought he was a bit rusty early on and had a couple of blows, but Tiger is obviously getting a bit cuter at home. I loved the way he galloped from the third-last to the line, and I'm looking forward to coming back here and running off level weights in December and March."