Count Meribel, who made a serious mistake at the second-last, shows a good attitude under pressure to fend off Le Breuil 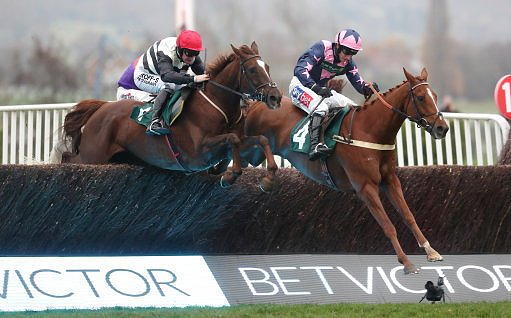 An almighty blunder at the second-last fence could not stop Count Meribel winning the Steel Plate And Sections Novices' Chase.
Jockey Mark Grant sat tight, despite being thrown up his partner's neck, and the pair rallied together to take the glory by a neck from runner-up Le Breuil - the 15/8 favourite Mr Whipped was third of the seven runners, beaten half a length. Six-year-old Count Meribel gave Grant his first-ever Cheltenham winner.
Nigel Twiston-Davies trains the winner not far from Cheltenham, but he passed much of the credit for Count Meribel's win to retired trainer Jim Old, who assists him at his Gloucestershire yard, and takes responsibility for the horse.
Grant said: "We got a bit outpaced coming down the hill, and I thought I would send him to the second-last just to save the race, and it was the one fence where he put down on me. He was good to find a leg, and actually quickened up after the last and did really well to get back up and win.
"Last year he made the running over hurdles, and today it probably just helped him to get a lead and give me a chance to fill his lungs up - that is probably why he finished so well. He had a lot of racing last year which maybe flattened him out a bit, but it toughened him up. It could be he doesn't want much racing.
"I think he's very good, and certainly as good as any I've ridden. If the ground was right for him he could be good enough for The Festival.
"He was brilliant everywhere and I just kept sending him. At two out, he didn't know what to do but did well to stand up. Credit to him, to battle back and win.
"He is an incredible horse because he has been doing all the donkey work over hurdles and actually loved getting a lead today - I was able to fill him up everywhere. That's probably why he won because he had loads left. Hopefully, he is very smart.
"For me, to ride a winner here is quite amazing. It's my first winner at Cheltenham - everyone in racing wants to win here - and it's amazing."