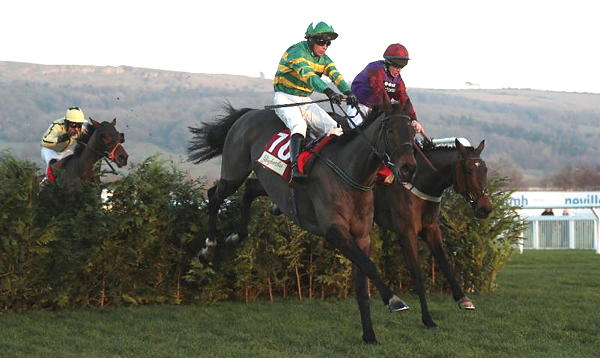 Fact Of The Matter (right) and My Hometown at the last

Fact Of The Matter (Jamie Snowden/Gavin Sheehan). was making his second start over Cheltenham’s unique cross country course, having gone down by three-quarters of a length to Josies Orders (Enda Bolger /Mark Walsh, 11st 8lb) at The November Meeting.
It was another Enda Bolger-trained contender My Hometown (Niall Madden,10st 1lb) who tried to make all the running. Leading or disputing it until after the last, he was passed by the staying-on Fact Of The Matter, with that rival running on well to score by a neck in another terrific finish. Josies Orders was another length and three-quarters away when finishing fast to snatch third from French challenger Amazing Comedy (David Cottin FR/Felix de Giles), who finished a further short-head behind in fourth.
Lambourn-based Jamie Snowden commented: “What a thrill! Fact Of The Matter is some horse. He jumped from fence to fence and Gavin has given the horse an absolute peach of a ride – he has nipped every inside bend.
“I think the fact that we had the inside rail, he winged the least beautifully and stormed up the hill. What a ride and what a horse. I rode one winner here and training one is just unbelievable, it’s a different thrill altogether.
“He took to the fences brilliantly and they do say that horses improve for their first run over them. Let’s hope that he can improve from his second to third run.
“Today was a handicap and the Cross Country race at The Festival is a conditions race, so it is a completely different kettle of fish. He has obviously taken to the fences well and it makes sense to come back here in March if we can.”

Gavin Sheehan said: “Fact Of The Matter seemed to be a lot more relaxed today and seemed to jump an awful lot better. He jumped brilliantly the whole way and put some massive leaps in but I was thinking after winging the last that the J P McManus horse was going to come back and do me.
“He tried his heart and soul out last time and I was gutted for him whereas today I am thrilled for the horse that he has got his head back in front. He gained a lot of confidence from his first run over the course.
“There are jumps out there that you can go through, rather than jumping up and over, and he learned that he can go through them. He was brilliant over the bank and, the further he was going, the better he was getting.”
The Glenfarclas Cross Country Handicap Chase was the final race in the Crystal Cup European Cross Country Challenge. The 10-race series takes in many of Europe’s premier racecourses, over unique combinations of hedges, banks, ditches and timber. The Challenge began in Pau in South West France in February and culminated at Cheltenham today, following four further races in France and visits to Poland, Belgium, Italy and to the Czech Republic for the Velka Pardubika.