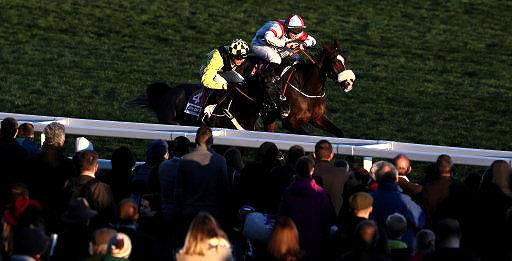 Colin Tizzard won the G2 Sky Bet Supreme Trial Novices' Hurdle for the second year in a row and the third time in total - he took the two-mile contest last year with Slate House and in 2010 with Cue Card.
Harry Cobden rode the Terry Warner-owned four-year-old, who made all to beat Itchy Feet by a length and a quarter at odds of 5/1. The five runners jumped only five flights of hurdles because the final two hurdles were removed due to concerns about low sun.
Tizzard said: "We had quite a few winners at the beginning of the week, but you come to Cheltenham and it is different gravy altogether. I am just chuffed Elixir De Nutz has done the job. You find out how good they are up here, don't you? We were just looking for excuses if he'd got beat. When the hurdles came up he was taking a length out of the others. He powered away. He's a beautiful young horse with size, everything about him.
"Harry's quite confident that he will end up in the championship races as a stayer. I'm not quite sure when the ground gets heavy that two miles won't be enough - he's not slow, is he? But we can work all that out as we go. Harry says there will be faster horses than him in the two-mile section, but we think he is championship class. But you're bound to think that if you win at Cheltenham, aren't you? This was a good race and he stuck it out well.
"He made the running last time because he was real keen, and we gave Harry the option today - if there was a fast pace, to sit in, and if they went slow, to go in front: use a bit of initiative, and that's what he's done.

Itchy Feet finished a creditable second to the front-running Elixir De Nutz.
Ridden by Gavin Sheehan, the four-year-old son of Cima De Triomphe kept on well in the closing stages but could not master Colin Tizzard's charge, who scored by a length and a quarter.
Sheehan said: "It was a good run from Itchy Feet. He liked the ground and jumped well, but the winner did it well."
Adrian Heskin, rider of third-placed Seddon, the Even-money favourite, who finished a further three lengths behind in third, commented: "It was a good run."
David Bass, jockey of the Kim Bailey-trained Two For Gold, who finished a short-head behind in fourth, added: "I think Two for Gold may appreciate a step-up in trip, but it was a good effort."