Cliffs of Moher wins but took a while to warm up 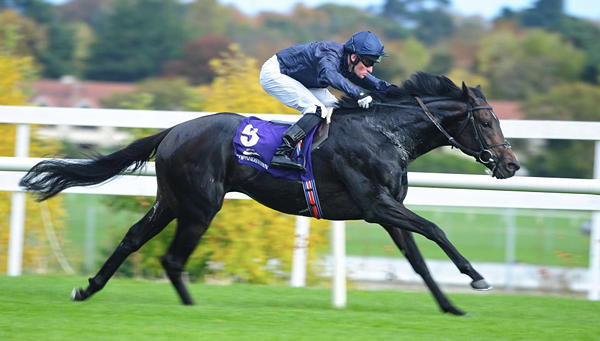 Cliffs Of Moher gave Aidan O'Brien a sixth victory in the Dee Stakes at Chester with a workmanlike performance in the Listed contest over an extended mile and a quarter.

The Galileo colt, having his first race for 195 days, was given a stern test by the pacesetting Max Zorin.

Ryan Moore had Cliffs Of Moher well positioned just behind the leader, but it took some time for him to overhaul Max Zorin.

The 4-5 favourite got on top in the final furlong to score by a length and half from the staying-on Bay Of Poets. Max Zorin was three-quarters of a length back in third place, with the inexperienced Mirage Dancer coming home well in fourth.

Moore said: "He just raced a bit sleepy the whole way really. He came out a little bit slow, the tempo wasn't strong and he was able to sit second, but he was always just having a look around.

"It was his first run of the year and he just felt a bit rusty, but I'd be very happy with him. It's loose ground and it's not ideal for him, to be fair."

Cliffs Of Moher was cut to a best-priced 7-1 for the Investec Derby.

"I think he'll improve a lot. He'll have learnt a hell of a lot around here. Ryan said he was learning his trade as he was going round. I think Aidan and the boys will sit down next week after the trials and make a plan and decide which way they're going to go."

Coolmore representative Kevin Buckley added: "I think he's won nicely, it was a good performance and Ryan was happy with him. He's got a lot more to learn, he hasn't run since October and a huge amount of improvement will come after that race."

Trainer Andrew Balding was delighted with the performance of Max Zorin.

He said: "I thought he'd nicked it for a moment but we're thrilled with him. He's got good tactical speed so we thought it best to use it. We've always thought a bit of him and we've made the favourite work.

"We'll have a look and see where he goes next but he could be the type to take to America later in the season."

Connections of the Sir Michael Stoute-trained Mirage Dancer are in two minds as to whether to let him line up at Epsom on June 3.

Teddy Grimthorpe, racing manager to owner Khalid Abdullah, said: "He galloped out really well at the finish and from the horse's point of view it was a good effort. He was a bit luckless, but that is what can happen here.

"We still have high hopes for him and we'll just have to see how he does but if we aim very high, which means the Derby, then you are asking him a very big question. Otherwise we'd be looking at Royal Ascot and the King Edward VII Stakes.

"On that, the Derby still looks a big ask but he'll have learned a lot today. He'll have to show some good things at home to go to the Derby."