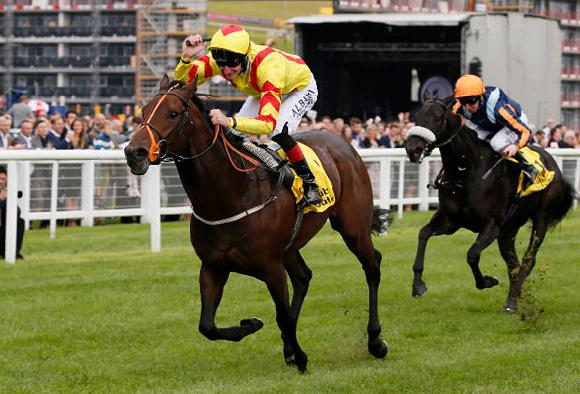 Clive Cox's Harry Angel won the Mill Reef at Newbury on his final start as a juvenile and there was no disgrace in his comeback effort behind Blue Point in the Pavilion Stakes at Ascot earlier this month.

He was a warm order as the 5-6 favourite for this Group Two assignment and odds-on backers had few concerns for the duration of the six-furlong journey.

Harry Angel pinged the start in the hands of Adam Kirby and was soon bowling along enthusiastically at the head of affairs.

It was clear entering the final furlong that he was not for catching and he passed the post with four and a half lengths in hand.

Second Thought was given a more patient ride by Robert Winston and came through to fill the runner-up spot.

Kirby said: "He's a very big, strong horse and I think we were all aware that there was nothing in the race quick enough to lead him. I just let him do it and it will do him good because he's had a race and he'll improve again from this.

"I was really pleased with the way he behaved, he's growing up with every run. I think the world of him. We haven't seen the best of him yet. There's still more to come. He's a machine, this lad."

Cox said: "He's just very exciting and after the joy of having some very good horses after the last couple of years, I really couldn't believe our luck to have this guy.

"He's done so well and he's progressed. We had a hiccup with the stalls, but everyone has worked really hard on that.

"He's going the right way and that's what I'm proud of. He's a very special horse. He's just had a bit of anxiety - the talent has always been available, it's just a case of giving him the confidence to prove it. The Commonwealth Cup will, without doubt, be next for him."