Paisley Park destroys them to win the Cleeve! 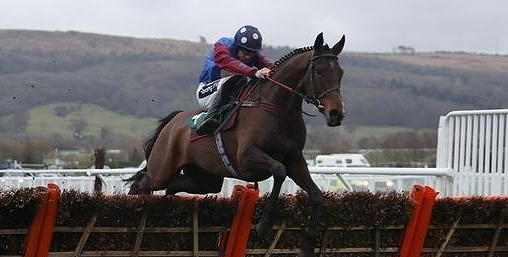 Paisley Park confirmed himself as the leading British-trained contender for the G1 Sun Bets Stayers' Hurdle as he routed the opposition to record a fourth victory in as many starts this season.
The seven-year-old, who provided trainer Emma Lavelle with a first G1 win when taking the JLT Hurdle at Ascot in December, travelled in mid-field of the 12 runners as Lil Rockerfeller (Neil King, Bryony Frost) and Sam Spinner (Jedd O'Keeffe/Joe Colliver) disputed the running.
Paisley Park ran on strongly between horses to take up the running for Aidan Coleman approaching the final flight and readily stormed clear, going on to win by 12 lengths from West Approach (Colin Tizzard/Tom Scudamore), with two lengths back to third home Black Op (Tom George/Noel Fehily) in the 12-strong field.
Emma Lavelle, who stables are in Wiltshire, said of her stable star: "It was amazing. Paisley Park was so impressive and I couldn't be more thrilled for everybody - it's exciting, really exciting.
"He was a very sick horse after his bumper run and last year was definitely about getting over all of that and getting stronger with another summer of grass.
"My husband Barry (Fenton) has been riding him every day and he has done an amazing job because he has instilled so much confidence in the horse, who has just got better and better. Paisley Park has just got so much more professional about it.
"Andrew Gemmell (owner) is such a massive supporter of racing and us in particular. It couldn't happen to a nicer person. He is a humbling man and I am thrilled for him."

Aidan Coleman said: "I know this horse really well but, coming down the hill to two out, I thought 'Jeez, what is going on here?'
"He does travel a little bit behind the bridle, which is why he finishes his races so well, but I have given him a squeeze coming off the bend.
"I knew as soon I had done it that it was the biggest mistake I could have made because I was there literally a furlong too soon. You could see his ears were pricked the whole way up the run-in and it was a good job that he kept going and got me out of trouble."
Winning owner Andrew Gemmell, who has been blind from birth, commented: "I can't believe it - it's fantastic and has surpassed my expectations.
"After his first couple of runs, Paisley Park was seriously ill and it was touch and go whether he would survive. He has come back and is just growing into himself.
"It's only 47 days until the Stayers' Hurdle and we cannot wait. I was supposed to be at the tennis in Australia this week, but coming here instead was the best decision I have made in a while."