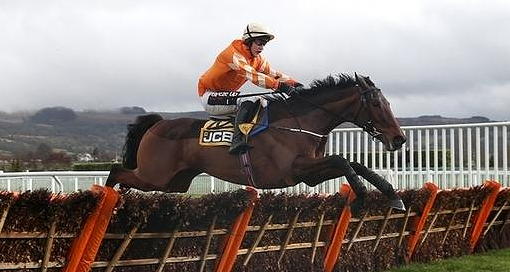 Joseph O'Brien oversaw Ivanovich Gorbatov's victory in the 2016 G1 JCB Triumph Hurdle, who was officially trained by father Aidan as his training licence had not come through.
The Irish handler, having his first official Cheltenham winner, has another leading contender for the four-year-old hurdling championship in Fakir D'Oudairies, who spread-eagled a classy field under J J Slevin.
The French import, successful in a Cork maiden hurdle on his first run for O'Brien on January 5, raced a close second to 5/4 favourite Adjali (Nicky Henderson/Daryl Jacob) before going on at the top of the hill.
Fakir D'Oudairies gradually went clear. He put in a good jump at the final flight and powered up the run-in to win by 14 lengths from his stable companion Fine Brunello (Barry Geraghty), with Adjali a further three and a half back in third.
Slevin said: "Fakir D'Oudairies had a good win at Cork the last day and has obviously come on for it. He has loads of experience from his time in France and that was a good performance.
"It's a G2 and we didn't hang around - we went a nice, even gallop - and my horse travelled very comfortably and jumped very well. He stuck at it very well - I didn't realise I had won by so far, but he did it very well.
"I would say that he would be better with a bit of juice in the ground, but it is a long way from being winter ground out there. He handled it fine and I am sure he will be fine on the ground in the spring.

"None of Joseph's four-year-olds have run against each other, so we don't know what we have. There are plenty of them at home and hopefully it will be an exciting few months ahead."

Daryl Jacob, on board Adjali, reported: "Adjali has run well. The Irish horses seem to be the best juveniles, but I think we might see a better Adjali at The Festival in March."

BC GAME is currently one of the most prominent Bitcoin casinos, having launched in 2017, and they are excited to announce the launch of their very own sportsbook!