Gosden, who trained Benny The Dip to win the big race in 1997, said: "I thought the horse was quite keen early in the race and took Frankie on, but he dropped him in and it was fine. The last thing I said to him beforehand was 'ride a cool race' and he did just that. He waited and waited.

"Jack Hobbs has run a superb race - he was beautifully balanced by William [Buick] down the hill and into the straight, and all being well he can run in the Irish Derby, but I thought Frankie gave the winner a great ride. What a horse!

"It's been a long journey with Frankie and it's great to be here. Investec who sponsor this whole Derby Festival are the most fantastic sponsors - the promotion they have given the race has been second to none. Full marks to them."

He said: "It's such a thrill - it's amazing! We can hardly believe it. I have all my family here which makes it so special. I have to thank all my staff at the stud, who are watching on television. In particular I want to thank Roy Gedge, my former stud groom who retired about 18 months ago. He brought this horse into the world.

"It's been my ambition to breed and own a Derby winner. My father [Sir Philip] was very keen on racing and breeding and I joined him some 30 to 35 years ago, but we have been trying longer than that. My father raced a horse called Pelerin in the Derby - he was left at the start but finished fourth. We've made up for that now, and it's more exciting because we've been trying for so long. I'm not getting any younger."

The William Haggas-trained Storm The Stars finished a staying on third to the delight of his trainer. The son of 2009 Investec Derby winner Sea The Stars was prominent throughout and stayed on with purpose to finish behind Golden Horn and Jack Hobbs. Haggas said: “He was very good there. He’s come on again and he’s run a great race from a good position. I’m delighted. He’s kept going and I’m thrilled.” 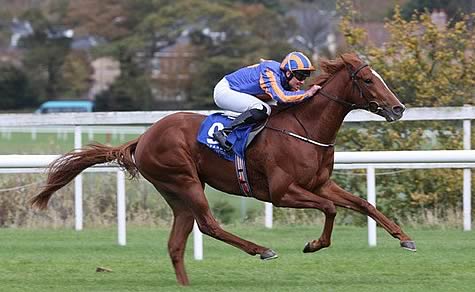 Giovanni Canaletto fared best for Aidan O’Brien, finishing a staying on fourth 10 lengths behind the winner.

He said: “The horse’s preparation wasn’t perfect and we would have loved to have taken him to Chester for the race there. He is a really big baby and another run would have been ideal in helping him gain a bit of racecourse experience. He is a horse with potential and it was a good race. He came home really well and will stay much further. Giovani Canaletto and our other two horses will all be confident in getting the St Leger trip so that is a race we will look at.’’

The BHA Handicappers subsequently allotted Golden Horn a rating of 125 for his impressive win.

This matches the ratings achieved by Workforce & Motivator, and just behind New Approach & Authorized (126).