All Yours flies down the far rail to land the Betfred Anniversary 4-Y-O Hurdle at 16/1 for Paul Nicholls and Sam Twiston-Davies. 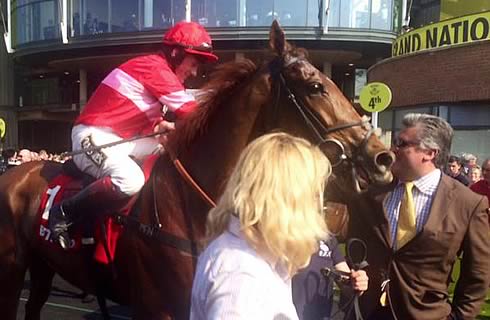 The gelding had finished fifth in the Fred Winter Handicap Hurdle at the Cheltenham Festival last month, but Nicholls felt the track and ground today were more to his horse's liking, and predicted he will make up into a smart hurdler next season.

All Yours, a 16/1 shot who was ridden by Sam Twiston-Davies, won by three-quarters of a length and half a length from Devilment and Bristol De Mai. Nicholls said: "He got in more trouble in running than you could ever imagine at Cheltenham, but he stayed on up the hill and made up an enormous amount of ground. He has improved from that and Sam gave him a great ride today - he has shown us what we have always seen at home.

"A flat track and good ground really suited him - I was worried we were trying to give him one race too many in a short time, but he was fine. I might have made a pig's ear of it by running him at Cheltenham and not coming straight from Kempton to here because we were always adamant he wanted good ground and a flat track.

"Sam said if he had got a clear run in the Fred Winter he would have gone very close to winning but it all went wrong. He gained valuable experience there but he had three quick runs and he is quite a light horse so I was a bit nervous about it. He is what we hoped he would be.

"I think he'll keep improving and with a summer of grass inside there should be plenty more to come. Next year he will be a smart hurdler. He's not a chaser, but we'll see where we go with him. Today was the day and we've no big plans."

"From the start of the season until now, it's like Sam is two different people. He has grown up so much - any team takes a bit of bedding in and he knows the horses now so I can leave it entirely to him. I have always told him not to stick to one plan and, if he wants to do something different, do it. Sam is riding with so much confidence and has done so, so well this season.

"There is a lot of pressure. I am always under a lot of pressure from everybody and that probably feeds down to the jockeys. If you can't cope with that pressure, it is a hard job. Sam has done very, very well - he's a great character, everybody likes him and that's a big plus. He is only going forwards from here."

YOURS TRULY THE YOUNG STAR

Jockey Sam Twiston-Davies signalled his relief of scoring early in the meeting for the stable after winning aboard 16/1 shot All Yours.

He said: "It's nice to get one on the board early, especially without The New One being here. Coming here I was determined to enjoy it. For some reason I felt under a lot of pressure at Cheltenham so to win there was great."

Referring to the winner's performance at Cheltenham, where he finished fifth in the Fred Winter Juvenile Hurdle, the jockey added: "He got stopped halfway down the hill at Cheltenham and the one thing you worry about is Cheltenham taking a lot out of them but it hasn't happened with this fella.

"I had saved a little bit but I had to use what I had left to get there. I hadn't hit him before the last so I knew that over the last furlong and a half of running I still had eight [cracks of the whip] to show my hand. They went a nice even sort of gallop but the front ones fell away and then Dickie [Johnson, on runner-up Devilment] made his move and I was trying to catch him and get by, which luckily worked out okay."

Trainer John Ferguson was delighted with the performance of 8/1 shot Devilment who finished the three quarter length runner-up behind All Yours.

The four-year-old travelled sweetly under Richard Johnson and was in front as the field jumped the final flight but he couldn't quite repel the challenge of the eventual winner, who swooped late to land the Grade One contest.

"We can't complain. He's run a blinder but he's just been caught. We're delighted with him. He's improving all the time and you can't ask for anything more.

"I would think he will stay hurdling next year. He doesn't have that much scope to jump a fence so we won't be rushing him into that.

"That'll be it for the season now - he'll have a nice holiday."

Bristol De Mai, who finished a further half a length back in third, ran a fine race and his trainer, Nigel Twiston-Davies, was also delighted with the way in which his juvenile ran.

"It's a shame he didn't win but it was a good run. He won't run again this season."