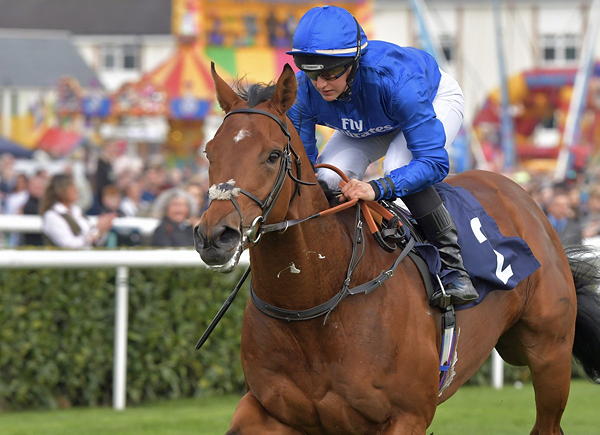 
Saeed bin Suroor registered his 36th winner at the Royal Meeting after 9/2 chance Benbatl gamely landed the 10-furlong G3 Hampton Court Stakes, giving Godolphin a fourth victory at Royal Ascot 2017.
Ridden by Oisin Murphy, gaining his first success at Royal Ascot, the three-year-old son of Dubawi was fifth until moving nicely into contention in the home straight.
Benbatl took the lead a furlong and a half out and kept on well for Murphy's urgings to fend off the late challenge of Aidan O'Brien's well-backed 10/3 favourite Orderofthegarter, to score by half-a-length.
Sir Michael Stoute's Mirage Dancer was a further three-quarters of a length behind in third.
Benbatl was an excellent second in the Dante Stakes at York in May, before finishing a creditable fifth in the Investec Derby at Epsom last time and Bin Suroor was effusive in his praise of the winner.
The Godolphin handler said: "When he won the first time, we thought that he was the right horse for the big races.
"He finished fifth in the Derby and he ran well, but he came from too far back and finished strong, so we thought that a mile and a quarter would be better for him.
"Sheikh Mohammed [Godolphin's founder] made the decision to run him in today's race and Benbatl is obviously improving all the time.
"Today's trip was brilliant for him. He was in a nice position and kicked really well. He is a nice horse for the future.
"Last year, he was very backward, I looked after him in the winter and then early in the season, he showed some class.
"It is brilliant to win at Royal Ascot. These races are hard to win but finally we find the right horse to win.
"We will keep the options open. We might take him to York for the York Stakes (G2, July 29, 1m 2f 88y) or the Great Voltigeur Stakes (G2, August 23, 12 furlongs) or we could go to Goodwood for the Gordon Stakes (G3, 1m 4f, August 5). Then later maybe give him a break before the Champion Stakes (G1, October 21, 10f) at Ascot."
"I like him. He won really well first time at Doncaster and is a very honest horse. He could be anything for the future.
"Oisin is a jockey for the future. He is doing really well and has always done a good job for us in Dubai and here. We are going to use him even more in the future."
Suroor was also very open when discussing the current situation at Godolphin, which recently saw the operation's chief executive John Ferguson resign.
The Newmarket trainer continued: "Things are better and I am very positive for the future. I hope things will be good and the team is happy - it is so far so good.
"Sometimes, you don't have the right horses to run, but this year, at least we have some nice horses which can be something for the future."

MURPHY GETS OFF THE ROYAL ASCOT MARK
The G3 Hampton Court Stakes gave jockey Oisin Murphy a career landmark, his first-ever Royal Ascot success.
The 21-year-old Irish jockey revealed his delight in his achievement, celebrating continuously as he crossed the line a half-length in front of Orderofthegarter.
"It's a massive monkey off my back, just delighted to get it," said Murphy. "It's absolute elation, I don't normally celebrate like that, and I know it's only a Group 3, but this meeting is very important. When watching the replay tonight, I'll be stopping the film straight after the line, I won't be watching the celebrations!"
Murphy had previously ridden Benbatl in the Epsom Derby to finish fifth behind Wings Of Eagles and kept the ride for today.
"He travelled like the best horse in today's race because he was the best horse in the race," said Murphy. "I am very fortunate to have a very good job with Qatar Racing, but Saeed puts me up sometimes as well and to get a winner for Godolphin is great, it's a very important week, it's fantastic.
"He's out of Nahrain and by Dubawi so 10 furlongs is his trip. They were all keen in the race, because you are holding a possy, moving them forwards and taking them back at the same time. I wouldn't step him up in trip."
GARTER SECOND ORDER TO BENBATL
Orderofthegarter, sent off the 10/3 favourite, came home a half-length runner-up to the second favourite Benbatl.
This was only the second time the Galileo colt has run over a mile and a quarter but trainer Aidan O'Brien was confident this is his trip.
O'Brien said: "A mile and quarter, he has no  bother with it. I am delighted with his run."
Orderofthegarter has won twice over a mile but was fifth in the French 2000 Guineas before stepping up in trip in the 10 furlong French Derby, where he came home sixth of 12, under Seamie Heffernan.
Ryan Moore, who was having his first ride on the Coolmore three-year-old, added: : " He ran a very good race. The winner is a good horse.
"The right horses came to the fore."
STOUTE HAS ONE FOR THE FUTURE IN DANCER
The exquisitely-bred Mirage Dancer took third place in the G3 Hampton Court Stakes, a length and a quarter behind winner Benbatl and three-quarters of a length from second-placed Orderofthegarter.
Trained by Sir Michael Stoute and ridden by Andrea Atzeni, the Khalid Abdullah-owned and -bred colt is by Frankel out of dual Grade One winner Heat Haze. He was sent off at odds of 7/1.
Stoute said: "It was very pleasing. He's a progressive horse who is improving with each race. He's got a great frame that he's got to fill, good mind, good athlete - I think he's got a good future."
Atzeni added: "It was a good run; he's improving and he's a horse who will get better with age."